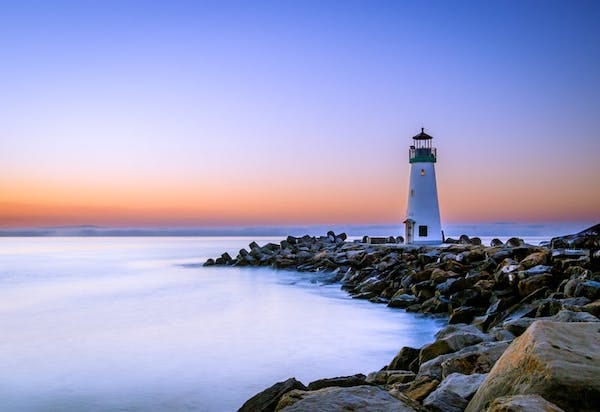 Everyone knows that San Diego has the best beaches.  And of course, there is the always temperate weather and friendly neighbors. But did you know that San Diego is home to four lighthouses?

Of the four lighthouses, two are modern navigational beacons. While they’re cool to view, they don’t have the rich history that the Point Loma Lighthouses do.

The Point Loma lighthouses are in Cabrillo National Monument. These local treasures are open to visitors 365 days of the year from 9:00 a.m. to 5:00 p.m. (Exhibit hours vary seasonally.)

Read on to learn 5 interesting facts about the Point Loma Lighthouse.

Califonia was a state for less than a month when Congress appropriated $90,000 to build lighthouses. The land for the Point Loma Lighthouse was selected in 1851. A small sandstone brick house and tall round tower were planned.

It took some time to bring a contractor from Washington, D.C., but eventually, the lighthouse lamps were lit for the first time on November 15, 1855.

Like most lighthouses of its time, the flame was fueled by a large cotton wick and whale oil. It gave off a yellowish-white light. It was visible at a distance of 31 miles on a clear night. The lighthouse keeper and his family lived there and fed it fuel all night.

4. It Didn’t Work Well As a Lighthouse

The Old Point Loma Lighthouse used a fixed system lens that sent light out in all directions at once. The light was steady and could be mistaken for some other kind of shore light by mariners. Also, the location tended to be shrouded in mist and fog.

In 1889, the light added flashes of red and white at one-minute intervals to distinguish it from other area lights.

In 1891, the New Point Loma Light was placed into service. The new lighthouse is about 100 yards to the south of the old lighthouse for better visibility. The light is only 88 feet off the ground so it is visible below clouds and fog.  A third-order Fresnel lens and 30-second fog blast completed the safety features.

The New Point Loma Lighthouse is still an active navigational aid and is lit nightly, although it does not require a live-in keeper.

Live and Play in San Diego

Explore the fascinating Point Loma Lighthouse and other charming San Diego attractions close to home. Visit the nightlife, try out some of the family attractions or just spend a day at the beach. Communities like Liberty Station, Ocean Beach, and Point Loma offer the best of San Diego’s climate and people.

Want to learn more about living in Point Loma? Let one of our experts show you around. Contact us today!